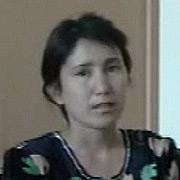 One day on TV I have watched Dr.  Salimov who stated that they who was born with diathesis would eventually become an allergic person. I have searched for this doctor but unsuccessfully. During 3-4 years we have been visiting an allergist in Andijan city. I narrated the doctor our medical history. He recommended us curing via inhalation and did prescribe “Beclazone” medication only. We used to take this medication three times a day. In case when throat closing started over again we saw an allergist repeatedly. The allergist has prescribed a ‘Sodium chlorine’, hormones and ‘Dexamethasone’ and requested to see him in five days. After taking hormones my son’s condition has been increasing. After examining my child the doctor stated that we were getting better and has sent us home. Hormones helped us temporarily.

Last year I came to Tashkent Medical Institute because I worried that everything could be repeatedly happen.  Having learned about professor Nazarov I wished him to examine my child but the nurse did not let us go in. Once again the ‘Beclazone’ has been recommended though I was afraid of using it repeatedly. Altogether, I was dissatisfied. Later on in one of the newspapers I have found Dr.  Salimov’s address and phone number. At present we proceed with the second course of treatment. During the 1st course of treatment Dr.  Salimov has personally welcomed us.  I was on the verge of tears from that happiness. Mercifully, the present status of my child is much better than before. I am only too glad.