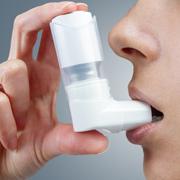 Bronchial asthma (asthma bronchiale, in Greek asthma is wheezing, shortness of breath) is the allergic disease characterized by recurrent episodes of wheezing caused by diffuse impairment of bronchial permeability that is associated with localization of the allergic process in bronchial tree tissues. The Joint Committee of American Collegium of Pulmonologists and American Thoracic Society termed the bronchial asthma as “disease characterized by variable airway obstruction and hyperreactivity of airways to various stimuli. This syndrome is characterized by the suppression of forced expiration, the manifestation rate of which changes either voluntarily, or as the result of the therapy performed”.

In 1991 the National Heart, Lung, and Blood Institute of America (NHLBI) acknowledged that bronchial asthma is characterized:

As one of the severest diseases, bronchial asthma is mentioned in ancient documents and works by Homer and Herodotus, Galen and Celsius, Renii-'Ihnophile-Hyaci nthe Laennec and Abu Ali Ibn Sina (Avicenna).

in details this disease based on scientific and practical materials, 1000 years ago. His hypothesis remain valuable up to our days due to practical opinion. Today every practitioner, while studying the Canon of Medicine, the standard medical text, finds lots of valuable information applicable presently.

Below are some doctrines and recommendations on bronchial asthma treatment offered by Ibn Sina: “Asthma is the lung disease when the person suffering it breathes as frequently as the person out of breath due to performing physical activity. This disease, when it occurs in aged people, can hardly be treated, since it cannot get to the period of maturity, and how it can be feasible when the disease is hard to cure even in younger people? In most cases, bronchial asthma worsens when the person is prone.

...This refers to the category of long illnesses, and is characterized with acute episodes like epilepsy paroxysms and convulsions. In asthma, the lungs and surrounding area are affected, since thick juice (mucosa) clog arteries, their small divergences and papula, sometimes the mucosa is in the lung tube, and sometimes - in the areolar substance of lungs and in hollow zones”.

The Esculapian gave the explicit explanation of the asthma occurrence cause: “Occasionally in rare cases, [asthma] occurs due to the dry lungs which results in their shrivel and shrinkage, and in some cases - it is due to the cold in lungs. It may occur due to the affection of initial position of respiratory tract...

From time to time [asthma] may occur due to the abundance of smoke, if it remains in lungs and settles there; and in particular circumstances, it can be caused by winds that stay in air passages and embarrass the respiration”.

While describing the symptoms of bronchial asthma, Ibn Sina gave the particular term for it similar to the modern pathogenesis of the disease. He says: “If asthma is caused by juices or fluid in the respiratory tube itself, then the constrain is observed with intake of breath followed by expectoration, wheezing, retention of the material stuck, feeling of heaviness and sputum expectoration coming out of area closely located [to the respiratory tube]. With juices [clogged] due to the catarrh, the asthma onset is abrupt, otherwise it develops gradually”. It seems that Avicenna considered two forms of bronchial asthma: allergic (atopic) and infection- induced allergic asthma. Further he states when describing the bronchial asthma therapy: “Asthma, respiration constrain and delayed breathing should be treated. [Asthma] that is caused by fluids is treated in the

following way: the fluid in lungs of such patients is carefully and regularly eliminated; if you reveal that the lungs are affected by the fullness [of fluid], you must evacuate it by means of loosening. Medications used for that should be resolving and facilitate the maturity of the disease, though not so heating since it could bring to the material dried and thickened... Therefore, you should remember to ensure material moistening and getting it to the maturity state, whether it is thick and viscous...”

The doctrines of the scientist are up of date in modern medicine. In severe bronchial asthma, especially at the status asthmaticus II and III Stages, rales are not auscultated in lungs. This is a very dangerous and life-threatening symptom. With the adequate therapy there is a mass of dry and moist rales in lungs, the sputum is possible to expectorate and the crisis is over, the patient is safe and out of status asthmaticus. When the sputum is expectorated, the air passage is cleared from thick juices, as Avicenna stated. This is the period when antihistamine drugs should in no way be administered since they intensify the viciousness of excessive juices, that is sputum, while the patient required taking only expectorants, preferably based on plants. Ibn Sina avoided recommending diuretic agents for such patients and he stated that: “Diuretics and other agents that affect urination appear harmful in bronchial asthma, since they hardly excrete the most l iquid part of the fluid out of body”.

As a matter of fact, in status asthmaticus condition particular liquid (it is described below) is provided 2 to 3 times a day, though intravenous injection (20 drops per minute) which contributes to dilute the sputum.

While providing recommendations to pediatricians, Ibn Sina says: “When the pediatric patient is treated, the drug should be mixed with breast milk; medium-potentiated drugs [by potency] are sufficient [for children]...”.

Ibn Sina provided with very valuable recommendations on prescription of medicinal drugs: “As for the other medicinal products, they should be changed [from one drug to another] to avoid abuse and body addiction to it. Furthermore, there is interaction between medicinal drugs and bodies [individual] to follow compliance which is only possible to gain during practical work, and when [various drugs] tested, the most beneficial should be recommended”.

All doctrines supposed by Avicenna many centuries ago are proved in modern medical practice. For example, a wide administration of glucocorticoid therapy dramatically expands hormone-resistant or hormone- dependent forms of bronchial asthma. Other therapy techniques are not effective for such patients, and in them the bronchial asthma runs

in a severe form, with various complications that may results in death. As you see, hormone-resistance or hormone-dependency in modern medicine in general, and in clinical allergology in particular, appear to become a great malady. And this is why we are mainly specialized in non- medicinal therapy in our clinic.

While treating bronchial asthma, Ibn Sina used a great number of complex and simple medicine that comprise the variety of medicinal herbs. The scholar strikes with his genius and uniqueness that he considered a wide spectrum of bronchial asthma onset causes while recommending treatment regimen. There is no doubt that therapeutic modalities recommended by Ibn Sina are still highly valuable nowadays. And this is what exactly we proved in practice.