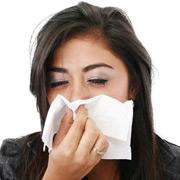 On an annual basis, especially in the spring period, the scientific medical journals publish a range of material devoted to the prevalence rate, clinical symptoms, diagnostics and treatment of allergic rhinitis.

The cost in direct medical care in Europe totals more than 1.5 bln Euro each year while indirect expenses are similar. The problem of allergic disease in Russia is similar to that. Up to 980 cases of this disease are reported per 100 tsd. population.

In the climatic and geographical conditions in Central Asia and in Uzbekistan, in particular the pollinosis with the rhinitis signs ranks first by the occurrence rate to make 88% cases, on the whole. Conjunctivitis ranks second with the figure of 54.4 %. In most cases all symptoms of pollinosis with rhinitis occur and resolve in the exacerbation stage. Rhinitis is classified into two kinds as follow:

Rhinitis is classified into three types according to clinical symptoms: mild, moderate and severe.

The following clinical symptoms appear with all three types of rhinitis:

Paroxysmal sneezing followed by the abrupt of nasal breathing difficulty and profuse discharge from nose are reported to appear in most patients to diagnose pollen rhinitis.

Many patients complain on the headache, itching and burning sensation in nasal cavities and eyes, as well as on frequent paroxysmal sneezing.

Sneezing mechanism in such patients is paroxysmal appearing in 20 to 100 and more sneezes one by one. Such a tormenting sneeze occurs all of a sudden and appears several times a day When this occurs, the health condition of the patient deteriorates and the physician has to render medical help. Such physical condition is considered emergency allergenic.

The sneeze is followed by the abundant watery rheum from nose and the nasal breathing is obstructed. Patient always complain on the stuffiness in nose depending on the allergic edema of the nasal cavity mucosa. The color of the mucosa coating and discharge appearance in patients monitored by our physicians varied in types; the nasal cavity mucosa pattern was bright-red, crimson red, marble-white, of bluish discoloration, pale pink with ischemic traces; excretion pattern: watery, muculent, seromucous.

It can be concluded by the results of our work that the bright red color of the nasal mucosa coating ranks first, the crimson red ranks the second and the remaining coloration is less frequent. Nasal watery discharge is reported in 74 patients of the 125 under monitoring, the muculent discharge (rhinorrhea) is reported in 41 of them, and seromucous appearance is noted in 3 patients.

Mild, moderate and severe clinical course vary in expression. In mild run of allergic rhinitis the symptoms and other signs occur only in morning hours and they quickly resolve. Symptoms of pollen intoxication are not visually observed.

With the severe allergic rhinitis patients develop paroxysmal sneezing at a rate of 50 to 100 sneeze at a time. The strong rhinorrhea, the abundant discharge from nose, is developed (the patients bring lots of paper tissues on them), strong itching is irritable, the nasal breathing is obstructed in the day time and at night (especially at night) and the patient suffers from insomnia. Sometimes these symptoms are combined with dry coughing and irritation in the throat (pre-acute severe asthma). All symptoms of intoxication are expressed. Antihistamine drugs show no effect anticipated. In most cases in moderate and severe courses the nasal bleeding is observed. This likely occurs due to edema and hyperemia of nasal mucosa coating and nose vessels get easily permeable. In severe allergic rhinitis the rescue emergency care is required.